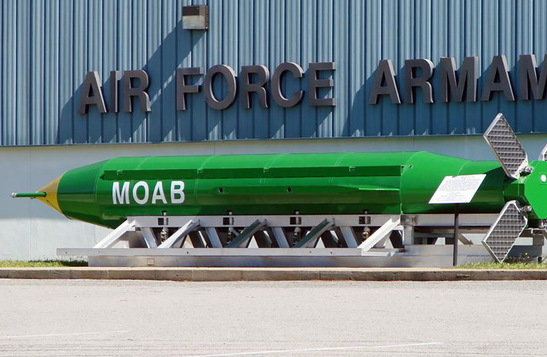 A few hours ago, the US military dropped America’s most powerful non-nuclear bomb on ISIS targets in Afghanistan and it’s the first time this type of weapon has been used in battle.
According to Pentagon spokesman Adam Stump, a GBU-43/B Massive Ordnance Air Blast Bomb (MOAB), nicknamed the “mother of all bombs,” was dropped at 7:32 pm local time.
A MOAB is a 21,600-pound, GPS-guided munition. The bomb was dropped by an MC-130 aircraft, stationed in Afghanistan and operated by Air Force Special Operations Command.
Officials said the target was an ISIS cave and tunnel complex and personnel in the Achin district of the Nangarhar province.

White House press secretary Sean Spicer said, “the United States takes the fight against ISIS very seriously and in order to defeat the group we must deny them operational space, which we did. The strike “targeted a system of tunnels and cave that ISIS fighters use to move around freely.”