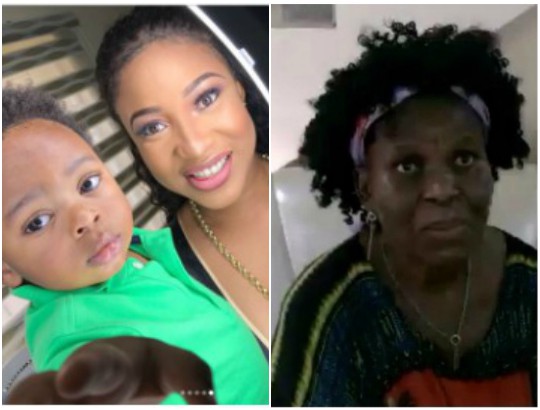 Estranged nanny of Tony Dikeh’s son, Mrs. Mgbechi Enyinnaya, has accused the Nollywood actress of subjecting her to all forms of emotional and psychological abuse while working for her.

The 56-year-old native of Imo State, who opened up on what really transpired between them in a chat with journalists in Lagos on Sunday after a video showing her being questioned by the actress in company of others went viral on the internet over the weekend, said that contrary to claims by the actress of showing her love by regularly gifting her money for her children, she had never done so.

Though Enyinnaya acknowledged that Dikeh had on a number of occasions given her clothes for two of her children, she dismissed most of what Tonto said, in a disclaimer over the weekend, as false.

“Throughout the period I worked for Tonto, she always assaulted me verbally. At the slightest opportunity, she would rain abuses on me and tell that she would scatter me if I wasn’t careful. I lived in that house with her despite all the constant harassment because of her son, King. I loved the boy like my own child and it was because of him that I stayed long with her.

“Tonto said that she had taken me to 15 countries, let her show the world my passport and the copy of the visas she claimed to had obtained for me. The only place we went outside Nigeria together was Ghana and it was her husband, Churchill, that took us there.

“The video she posted online was not the complete version. All the things I said, they did not show it. She only showed where she and others were intimidating me; they never allowed me to talk. Let her tell the world the truth because I worked for her diligently and had never conspired with anyone to tarnish her image.”

Dikeh, whose marriage with Olakunle Churchill crashed earlier this year over claims of infidelity and battery, had posted a disclaimer through the Instagram page of her friend, Halima Abubakar, accusing Enyinnaya of collaborating with others to smear her name.

According to her, she had fired the nanny about two months ago after realising that she wasn’t really fit for the job following constant sickness – a claim the 56-year-old woman denied vehemently.