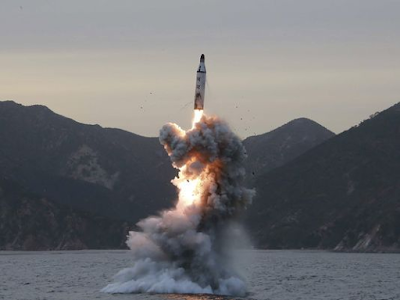 North Korea launched a ballistic missile today Saturday (in their local time) but the missile exploded soon after launch without completing it, U.S. officials said. The failed test involved a short-range, non-nuclear missile, which would only be able to hit Seoul, but not Japan. A US official said they had warning of the test and watched it closely.
A South Korean military official said that the test occurred around 5:30 a.m. local time. The official said:

“Currently, we are closely monitoring North Korea’s further military provocation and are totally ready to meet any and all kinds of provocation,” the official told NBC.

U.S. Pacific Command said the missile did not leave North Korean territory, adding that the North American Aerospace Defense Command determined the launch did not pose a threat to North America.

The White House said that the administration is aware of the test and that President Donald Trump has been briefed. Earlier in April, North Korea conducted a missile test a day after the country held a military parade celebrating leader Kim Jong-un’s grandfather, Kim Il-sung.