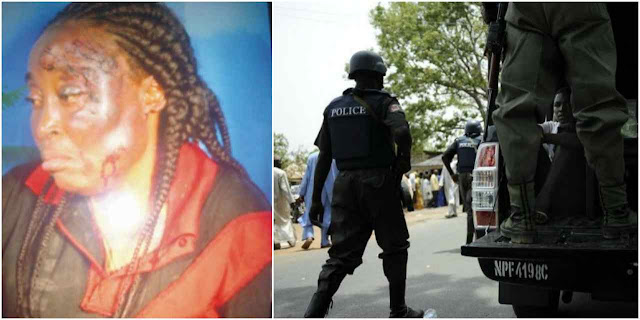 Ruling over a case of police brutality today at Ekiti State High Court,  Justice Olusegun Ogunyemi, awarded the sum of N20m damages against the Nigerian Police, over illegal detention and brutalization of a 51-year old woman and a mother of five, Mrs Sola Aregbesola.
The lady who claimed she became blind as a result of the assault, was reportedly beaten, tortured , wounded, chained and detained for 72 hours at Ilawe Police Station last year October over an issue that bordered on an illicit love affair between her husband and another woman.

It was also gathered that she was awarded another N250k cost against the police, an amount which covers the expenses spent on medical treatment as a result of the unlawful detention and beating she suffered in the hands of the cops.

The plaintiff, Aregbesola, a resident of Okebedo in Ilawe Ekiti, who was subsequently picked up by the police, on the order of her husband’s mistress, had before the arrest, suffered an attack from the accused who allegedly poured hot soup on her face, which inflicted serious bodily injuries on her, causing deformation to her person.

It was also alleged that she was almost stripping her naked while in custody.