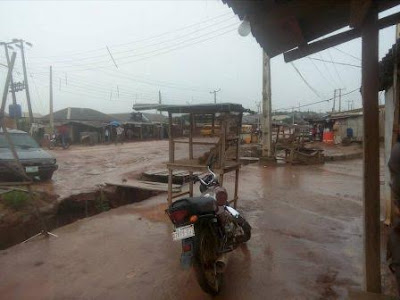 The police in Lagos are currently on the trail of a man identified as Omolaja Shodipo who allegedly murdered his wife and fled their home in Ikorodu yesterday April 24th.

According to neighbors, Omolaja had a disagreement with his wife on Sunday April 23rd and the disagreement continued into yesterday and he physically attacked her killing her in the process.

The man upon seeing his wife had died, began to cry, scream and roll on the floor. As his neighbors moved to his house to inquire why he was crying, he fled the scene and has not been seen or heard from.

When the neighbors went into his house, they found his wife and mother of his four children on the floor in the pool of her blood. They also found an axe close to the deceased. However the axe had no blood stain on it.

The police men at Owutu police station were invited and the remains of the woman was taken away and deposited at the General hospital morgue in Ikorodu. Confirming the incident, the Lagos state command spokesperson, Olarinde Famous-Cole, said the police is currently in search of the man.