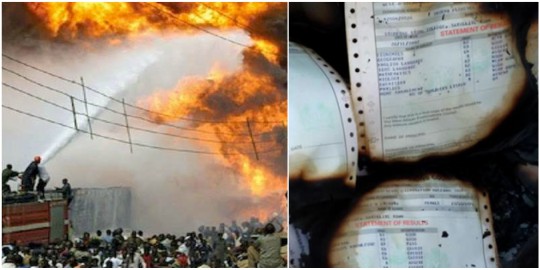 It was gathered that the baby was burnt to death in Makoko, in the fire incident that occurred due to a resident’s carelessness, after she left what she was cooking on a stove unattended to.

“We gathered that a woman was cooking food; she left the place and forgot it.
“The fire started from there and razed a lot of makeshift structures to the ground.
“In the confusion that greeted the incident, the parents of the child left him inside the house. By the time they remembered that he was in the house and tried to rescue him, it was too late. The child had been burnt to death. He was supposed to be named today (Sunday).

“Four fire trucks from the Lagos State Fire Service responded to a distress call from the area and put out the fire in the early hours of Sunday.”

Punch Metro also reported that the second fire incident, was caused by an electric spark from a cable triggered the fire, which damaged 32 flats. This occurred in a building that used to be known as Stepping Stone Comprehensive Girls College.

A firefighter, who was at the scene, said while a woman was injured, copies of burnt WASSCE results were found in the building.

“The place used to be a school. It was converted to 32 apartments. A woman was injured, while WASSCE results of many former students were burnt. We cannot tell the number of results, but they were many.

“Also, 11 gas cylinders were burnt, with seven air conditioners. About 20 families were affected. It was the state fire service that initially responded before the Federal Fire Service was also called. The fire was put out around 12.25am on Sunday” he said.

The spokesperson for the National Emergency Management Agency, South West Zone, Ibrahim Farinloye, said the agency’s zonal Coordinator, Alhaji Suleiman Yakubu, advised the owner of the complex to gather the mutilated certificates and report the incident to WASSCE for issuance of Certified True Copies of the affected certificates.

Farinloye, who said he could not explain why the certificates were still in the building after the conversion of the building to residential flats, said investigations were ongoing.