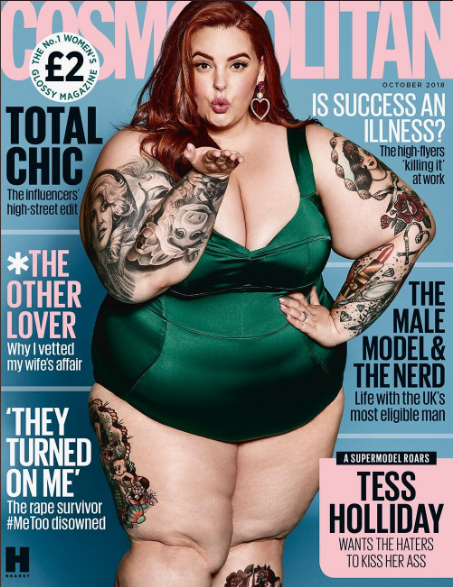 Piers Morgan is not done dragging Tess Holliday for being featured on the cover of Cosmopolitan UK to promote body positivity.

After the Cosmo cover was released last week, Piers Morgan blasted the 33-year-old plus-size model for her weight and also blasted Cosmo for promoting such.

He was called out by some people for body-shaming but he stood his ground as has now launched another attack on Tess.

On Good Morning Britain this morning, the TV personality had a debate over Tess Holliday’s appearance on the cover of Cosmo. Cosmo’s Editor-In-Chief Farrah Storr appeared on the programme to defend the cover shoot.

Piers said on the show:

I would say the same about a man or a woman, my view about this. But for Cosmo to put this on their cover is wrong, dangerous and deluded.

This is one cover, which has a larger lady on the cover, in a sea, in a world, in a culture which has venerated – since I can remember – thinness.

Are people going to look at that and go, ‘Do you know what? I’m going to go and mainline doughnuts, this is what I want for my life’. Of course not. It’s patronising to say. I’m celebrating her. I am not celebrating morbid obesity.

The reason she is on my cover is to show there is a different way to look.

After the show, Piers took to Twitter to continue the attack.

He wrote: “Sorry, but 5ft 3in & 300lbs is NOT a ‘positive body image’ to celebrate on the front cover of a magazine as Britain suffers from an ever-worsening obesity crisis. ?@GMB?” 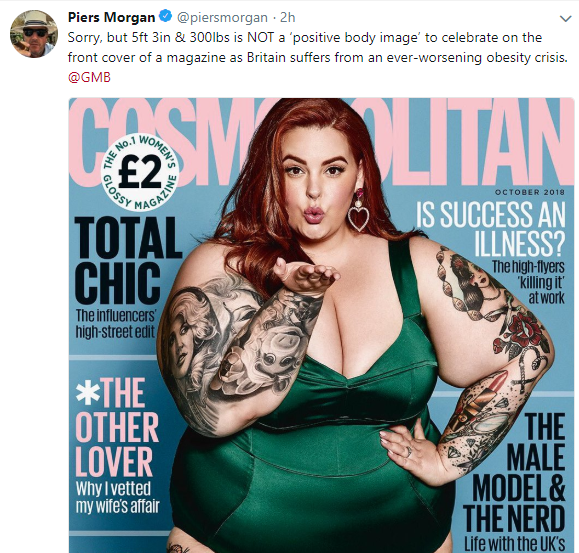